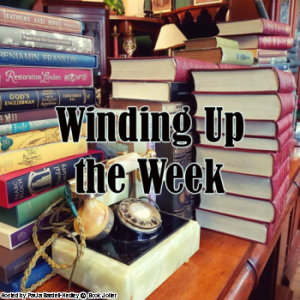 This is a weekly post in which I summarise books read, reviewed and currently on my TBR shelf. In addition to a variety of literary titbits, I look ahead to forthcoming features, see what’s on the nightstand and keep readers abreast of various book-related happenings.

Here I recommend engaging podcasts and other digital recordings I’ve come across during the week. Hopefully, you too will enjoy them.

This week I bring you news of radio drama from Wales in the form of an adaption of Myfanwy Alexander’s best-selling novel, Bloody Eisteddfod. This series of BBC Sounds broadcasts provide “lively insight into contemporary rural life as well as culture” and features a “stellar cast of the finest actors in Wales, headed by Steffan Rhodri and Rhian Morgan”. Described on its official page as “engaging [and] packed with incident and vivid characters,” this new satirical whodunnit follows Inspector Daf Dafis of Dyfed Powys Police as he anticipates the challenge of hosting “Wales’ greatest cultural festival [on] his patch”. The event, which turns out to be filled with “as much crime as culture”, leads to mayhem in the Maes. >> Bloody Eisteddfod >>

I am going to share with you four of my favourite literary posts from around the blogosphere. There are so many talented writers posting high-quality book features and reviews, it is difficult to limit the list to only these few – all of them published over the last week or two: 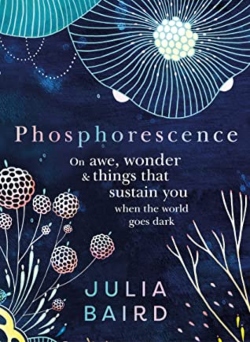 Phosphorescence by Julia Baird – Kate W from booksaremyfavouriteandbest needed little convincing of “the importance of […] wonder and awe” described in Phosphorescence: On awe, wonder and things that sustain you when the world goes dark – especially as “a big rain event” occurred in Melbourne when she was reading the book. Baird’s “part-memoir-part-essay-collection” may not be perfect but its “theme of mindfulness” and “fascinating research” encourage her to “revisit” its pages in future.”

Tragedy or farce: Natural History by Carlos Fonseca – “The human connections” in this ambitious novel “are real and affecting”, says Joseph Schreiber at roughghosts. Indeed, it is “a daring and intelligent spectacle peopled by a wide and vividly drawn cast, both historical and imagined”, from “a writer who loves to play with ideas”.

Appointment in Arezzo by Alan Taylor – This “curious memoir” of Taylor’s friendship with Muriel Spark is, according to Simon Thomas from Stuck in a Book, “affectionate” if “disconcerting”, and as “satisfying as it is odd.”

Book of the month: Narine Abgaryan – A “striking and heartwarming read” is the way Ann Morgan of A Year of Reading the World describes Three Apples Fell from the Sky by the “Moscow-based Armenian writer” Narine Abgaryan. This “powerful debut” may sound depressing, says Ann, “yet it isn’t” – because there are “moments of joy” and real humour “stemming from bleak events”. 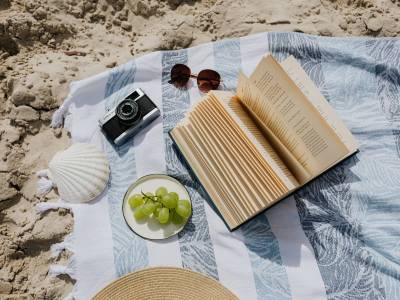 Evening Standard: How Small Pleasures by Clare Chambers became the word-of-mouth hit book of the summer – “Readers have fallen for Clare Chambers’s tale of a virgin birth in Fifties London suburbia. Jessie Thompson meets her”.

Boston Review: The Literature of White Liberalism – Melissa Phruksachart finds the “popular new genre of antiracist nonfiction seeks to educate white readers about race, but it does not center more powerful critiques from the Black radical tradition.”

Avidly: Moby Dick and Breastfeeding – “Moby Dick, that magnum opus of American literature, famously contains no women”, says Jessica Pressman. “But it does have breastfeeding.”

Greek Reporter: Greece to Restore Historic Home of National Poet Kostis Palamas – “After many years of neglect and dilapidation, the historic home of poet Kostis Palamas in Athens is given a lifeline by the Greek Ministry of Culture”, finds Anna Wichmann.

Literary Hub: She Said She Would Write the Essay Herself: Reading Virginia Woolf in Middle Age – “Heather O’Neill discovers many ways to see the self in Mrs Dalloway”.

Elle: Black Women Are Topping Bestseller Lists. What Took So Long? – “Roxanne Fequiere on The Vanishing Half, Luster, Transcendent Kingdom and the writers denied their deserved recognition”.

ilovelibraries: What It’s Like to Be a Library Cat During the Pandemic – lsimon wonders what the pandemic has meant for library cats across America.

The Washington Post: Mermaid mania is real, and it’s seeping into the realm of nonfiction books – “Mermaids are having a moment that has lasted roughly a decade”, says Sadie Dingfelder, but she doesn’t think these “mythical beings [make particularly] good role models.”

Texas Monthly: Vivian Stephens Helped Turn Romance Writing Into a Billion-Dollar Industry. Then She Got Pushed Out. – “Now, as the Romance Writers of America reckons with its history of racism, will she finally get her due?” asks Mimi Swartz.

The New Republic: The Everyday Inspiration for Anna Karenina – Jennifer Wilson asks: “Did distractions, disruptions, and gossip shape Tolstoy’s novel as much as long-simmering ideas about morality and desire?”

Lapham’s Quarterly: The Art of Upsetting People – According to Chris R. Morgan, “Jonathan Swift and the Marquis de Sade [are] patron saints of extremism.”

The New Yorker: Can Gore Vidal Find Rest in His Final Resting Place? – Kitty Kelley discovers the “contentious writer, who liked to say that, after fifty, litigation replaces sex, had very specific plans for his burial.”

Boing Boing: Since the pandemic, an Australian library called 8,000 elderly patrons just to check in – “Melbourne’s Yarra Plenty regional libraries may have closed to the public in March, but the staff continued their public outreach by reviewing their patron database for anyone over age 70 and calling them.”

Humanities: Citizen Readers – Parrish Peede conducts an interview with Louise Dubé and Maryanne Wolf about civics and the reading brain.

Literary Hub: How Fiction Allows Us to Inhabit Animal Consciousness – “Kathleen Rooney on some of her favourite non-human narrators”.

Smithsonian Magazine: Why a Campaign to ‘Reclaim’ Women Writers’ Names Is So Controversial – Nora McGreevy finds some critics are saying the Reclaim Her Name initiative is failing “to reflect the array of reasons authors chose to publish under male pseudonyms”.

Slate: The New Book From the Author of H Is for Hawk Shows No One Describes Nature More Beautifully – Laura Miller discovers Helen Macdonald’s new collection of essays, Vesper Flights, reveals “wonders around you, wherever you’re quarantined.”

3: AM Magazine: Spoken in Jest: On the Lasting Importance of Georges Perec – Darran Anderson on connecting with the writing of the French novelist and essayist, Georges Perec, during a difficult time in his life.

Esquire: Fact Checking Is the Core of Nonfiction Writing. Why Do So Many Publishers Refuse to Do It? – “Emma Copley Eisenberg discusses the dangers of authors being forced to hire their own fact-checker out of pocket. If they do so at all.”

History Today: Frankenstein: Between Two Worlds – According to David Wootton, “Mary Shelley’s great novel is not a commentary on the Industrial Revolution, nor is it a simple retelling of the myth of Prometheus. It is far more original than that.”

The Paris Review: Leaving It All Behind: A Conversation with Makenna Goodman – Alexander Chee speaks to author of The Shame about leaving New York publishing behind for the farms of Vermont, and why publishing her first novel was traumatic.

The Polish Book Institute: Bedside table #46. Maciej Świerkocki: I use every interstice to replenish my reading deficit – “The translator and writer Maciej Świerkocki talks about his work on the translation of James Joyce’s Ulysses” and much more.

The Rumpus: What to Read When You Want a Good Short Book – Kim Adrian shares a reading list to celebrate Dear Knausgaard.

Russia Beyond: From Tolstoy to Brodsky: What happened to the descendants of great Russian writers? – “From tram driver to billionaire”, Alexandra Guzeva wonders “which ‘apple’ fell far from the tree, and which one would have made their famous father proud?”

The New Publishing Standard: Spotify’s move into audiobooks is a seismic shift in the publishing landscape, but the ripples will take time to be felt – Mark Williams wonders if Spotify will dominate the audiobook scene in the same way it has music?

Culture Trip: Harry Potter Fans to Celebrate Back to Hogwarts Day Virtually – On 1st September Harry Potter fans make their annual pilgrimage to London’s King’s Cross station, where they gather below the digital timetables to celebrate Hogwarts Day – this year they will be doing so virtually.

Literary Hub: Learning to Appreciate the Small Things From a 500-Year-Old Japanese Writer – Eric Weiner is seduced by the boldness of Sei Shōnagon.

Scroll.in: Systemic erasure: Why writing from North-East India doesn’t make it to lists of ‘Indian’ books – “The absence is not one of individual choice, but of structural exclusion”, says Sneha Khaund.

The Sydney Morning Herald: Two writers navigate the problems they have in becoming Australian – “Emigration is a strange business,” says Anne Susskind, “and these memoirs are testament to life’s old chestnut: you take yourself with you wherever you go.”