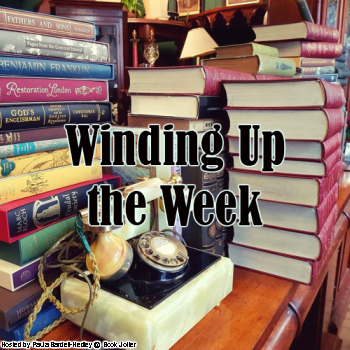 We survived Storm Ciara intact, if somewhat dishevelled, but we are now awaiting the full force of Storm Dennis (inevitably named Dennis the Menace by the media), with the usual warnings of potential flooding and general disruption. We are situated in an Amber Warning area according to the BBC weather forecaster – meaning potential risk to life and property – so it looks like we’re in for another cosy weekend of reading, drinking cups of tea and listening to Radio 4 while the tempest rages about us. Quite pleasant providing our lodge doesn’t do a Dorothy, i.e. become airborne and flatten the Wicked Witch of the East (or anyone else for that matter) when coming to rest!

As ever, this is a weekly post in which I summarize books read, reviewed and currently on my TBR shelf. In addition to a variety of literary titbits, I look ahead to forthcoming features, see what’s on the nightstand and keep readers abreast of various book-related happenings.

* The Coming of Corylus Books *

Fellow book blogger, Marina Sofia of Finding Time to Write, has announced her involvement in a thrilling new venture. She and four friends are set to establish a new indie publishing concern, specialising in “fine crime fiction in translation: from Romania, Iceland and beyond.” It is hoped Corylus Books will be launched at the London Book Fair (10th-12th March 2020) at Olympia London. The group of “translators, academics, bloggers, festival organisers, reviewers and publishers” are passionate readers and “are eager to build bridges between different cultures” through literature. To see a selection of forthcoming titles and discover how they came up with the name, head over to Marina’s post, Exciting news: what’s been keeping me busy. You can follow @CorylusB on Twitter and an official website is currently in development.

I’m going to share with you three of my favourite literary posts from around the blogosphere. There are so many talented writers posting high-quality book features and reviews, it’s difficult to limit the list to only these few – all of them published over the last week or two:

Dear Edward by Ann Napolitano – review – Janet Mason of From First Page to Last says Napolitano’s new novel, which is based on the true story of a child surviving a plane crash, is a memorable and “poignant” tale of “what it means to survive and to be alive.”

Book Review: The Vagabond’s Breakfast by Richard Gwyn – “The recollections in this book are intriguing, frightening, and fascinating in turn”, says Rachel Carney from Created to Read of Gwyn’s 2011 memoir. She declares it “a captivating read”.

A deep and abiding melancholy: Saudade by Suneeta Peres Da Costa – The “spare, wistful melancholy of the protagonist’s early memories […] carries just the right tone”, says roughghosts’ Joseph Schreiber of this “coming-of-age novel” from an “Australian author of Goan heritage”.

The Hudson Review: The Durable Art of Elizabeth Bishop – Bishop’s life was short and often difficult, but her achievements many. David Mason reviews Love Unknown: The Life and Worlds of Elizabeth Bishop, an illuminating biography by Thomas J. Travisano.

The Guardian: Top 10 books of eco-fiction – “As the climate crisis grows ever clearer, the best fiction can help realign our conception of nature”, says Michael Christie.

The Paris Review: A Good Convent Should Have No History – How Eileen Power’s radical histories of medieval nunneries paved the way for Sylvia Townsend Warner and Virginia Woolf.

The Phnom Penh Post: Bookstores in China bet on e-shopping to boost sales – “As the coronavirus epidemic spreads across the country, bookstores are investing more in the online market to further explore sales channels, according to Beijing Business Today.”

The Bookseller: Hebden Bridge bookshop flooded as Storm Ciara hits – The Book Case shop in West Yorkshire, England, was flooded for the third time in recent years – on this occasion, by courtesy of Storm Ciara.

Daniel Frank: The Most Loved and Hated Classic Novels According to Goodreads Users – “Reading classic literature is like going for a 6am jog”, says Frank. “It has its loyal fans, but few enjoy it.”

Shondaland: 25 Must Read Books For Black History Month – “From classic novels to contemporary memoirs, this list shows just how vast and rich the black literary experience is”, writes Nylah Burton.

TLS: Bookends – Peter Straus surveys the past and future of reading.

The Conversation: Three things historical literature can teach us about the climate crisis – Literature of the past can help us to make the cultural shift that’s necessary to address climate change.

The Outline: We should all read more Jenny Diski – “The late British writer was a master of precision and not overthinking things”, says Leah Finnegan.

BookPage: The Mercies – Deborah Donovan declares Kiran Millwood Hargrave’s The Mercies an exceptional work of historical fiction, which offers insight into the rippling effects of extremism.

Publishing Perspectives: British Book Awards Celebrates Three Decades: The ’30 From 30′ Longlist – “To toast its 30th anniversary, the ‘Nibbies’ ceremony on May 18 will name a ‘best of the best’ winner with the lucky author onstage.”

The Hamilton Spectator: Ghostwriter: The Apple TV+ series that saved Hamilton bookseller – Craig Clark finds out how a Canadian bookstore was saved by Apple TV.

The Seattle Times: Are you a podcast fan trying to get into audiobooks? Sample the medium with these short-story collections. – “For podcast fans considering whether to make the jump to audiobooks, short stories could provide the perfect gateway”, says David Wright.

The American Conservative: The Time C.S. Lewis Went Full ‘Get Off My Lawn’ – According to Grayson Quay: “The scholar and apologist was brilliant, but an essay from later in his life brims with strange reactionary ramblings against the young.”

The Guardian: ‘They know us better than we know ourselves’: how Amazon tracked my last two years of reading – “Amazon knows more than just what books I’ve read and when – it knows which parts of them I liked the most”, says Kari Paul.

Literary Hub: The Graveyard Talks Back: Arundhati Roy on Fiction in the Time of Fake News – “What is the role of the writer in a time of rising nationalism?”

The New Republic: Infinite Jerk – “Adrienne Miller’s memoir of her relationship with David Foster Wallace is part of an emerging genre of women coming of age via an older, powerful man”, finds Laura Marsh.

JSTOR Daily: Is Emma Really the Heroine of Emma? – “Jane Austen gave her character Emma Woodhouse plenty of off-putting qualities. So does she even deserve her popularity?” asks Erin Blakemore.