Home › The Classics Club › DEWITHON WEEK 1: The Autobiography of a Super-Tramp by W.H. Davies

DEWITHON WEEK 1: The Autobiography of a Super-Tramp by W.H. Davies

“…I was reading deep into the night and, having to be up early for work, was encroaching on nature’s allowance of sleep.” 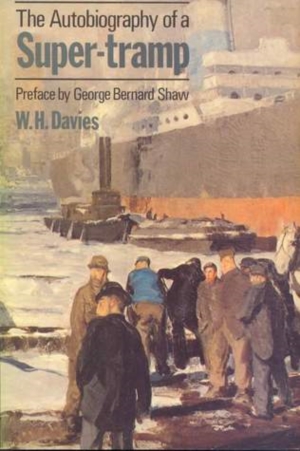 As week one of the inaugural Wales Readathon draws to a close, I know several Dewithoners will be keen to discuss the first seven chapters of The Autobiography of a Super-Tramp by the Welsh poet and writer W.H. Davies – the official Dewithon 19 book.

Published in 1908, his memoir of living as a tramp in the UK, Canada and the USA in the final years of the 19th century is considered by many to be a classic, written a quarter of a century before Orwell was Down and Out in Paris and London, and almost 50 years before Kerouac went On the Road.

Davies had a distinctive writing style: simple, humorous and playful, but always authentic and perceptive. He was an empathetic man with a conscience, but never recoiled from exposing his flaws. His book was praised by Osbert Sitwell for its “primitive splendour and directness” – though some of the events he described (and certain opinions he held) are undoubtedly shocking to modern readers. The more problematic episodes, which appear later in the book, should ideally be judged in the context of the era.

In my 1980 Oxford University Press copy there is an excellent Preface written in 1907 by the Irish playwright, critic and political activist, George Bernard Shaw. Following this is a short Author’s Note to the 1920 Edition, in which Davies says his autobiography “was written on the advice of a number of friends who claimed that [his] life of adventure would have an interest for the public, distinct from any merit [he] might have as a poet.”

In the Foreword to 1923 Edition (also included) he mulls over the many letters sent to him by readers of the book and concludes that a mere quarter of them buy it while the rest procure a borrowed copy. He includes the following epigram:

The man has talent, the man has genius,
And here’s the strange and cruel difference:
Talent gives pence and his reward in gold,
Genius gives gold and gets no more than pence.

William Henry Davies was born in the south east Wales town of Newport, on 3rd July 1871. We learn immediately from the book blurb that he was “born in a pub and learnt early in life to rely on his wits and his fists – and to drink.”

Davies hailed from a proud seafaring background. In Chapter I (‘Childhood’) we meet his grandparents, who adopted Davies and his siblings following the death of their father and the remarriage of their mother. His grandfather was a retired sea captain and owner of a public house, whose “pride it was, drunk or sober, to inform all strangers that he had been master of his own ship”. His grandmother was a respectable, chapel-going lady, with “strong opinions”.

Living in a pub, he became “acquainted with the taste of drink at a very early age, receiving sups of mulled wine at bed time, in lieu of cocoa or tea”. He attended school (when he wasn’t playing truant), excelled as an athlete and formed a boy “band of robbers” – but was “cured of thieving” by a combination his grandmother’s disapproval and a sentence of “twelve strokes with the birch rod” by the local magistrate.

He had several jobs after leaving school, including working for an ironmonger, but his first love was for books and he devoured the works of Shelley, Marlowe and Shakespeare. He had literary ambitions but put them aside for adventure, and by the end of Chapter II (‘Youth), following the death of his grandparents, he is setting off for America.

Sailing from Liverpool to New York in Chapter III (‘Manhood’), he arrives in a depression-hit USA, and heads almost immediately to Connecticut where he meets Brum, “a notorious beggar, who made himself at home in all parts of the country”. The two join forces and beat their way to Chicago, taking full advantage of a land where “food was to be had for the asking”. To Brum, begging was “a fine art” if not “a delight of which he never seemed to tire.” Such an impression did he make on Davies, with his “original turn of mind” and ideas “often at variance with others”, that he was given a whole chapter to himself (Chapter IV, ‘Brum’).

Along the way, the two men meet other vagrants, including New Haven Baldy, and they are thrown into jail for 30 days when caught in the act of begging (Chapter V, ‘A Tramp’s Summer Vacation’) . Upon release, Davies accepts employment as a wood-chopper before they move on again by means of riding the railroads, which is described in detail in Chapter VI (‘A Night’s Ride’), to find work in the hop fields. On their journey they meet Australian Red, a character of significance in Davies’s travels across the United States, and in Chapter VII (‘Law in America’) they head towards Michigan – a location famous among the tramping fraternity for its “exceedingly pleasant jail.”

I found the first seven chapters of Davies’s autobiography both entertaining and enlightening. There are darker times to come but he’s a skilled raconteur and, as Bernard Shaw freely admits, his stories of life on the road make one feel a “slave of convention” for working “tamely for [a] living”.

“I shall never forget the happy summer months I spent with Brum at the seaside. […] thanks be to Providence, the whole summer was at our disposal.”

Please share your thoughts on chapters 1-7 of The Autobiography of a Super-Tramp.

This is my eighth choice for The Classics Club.