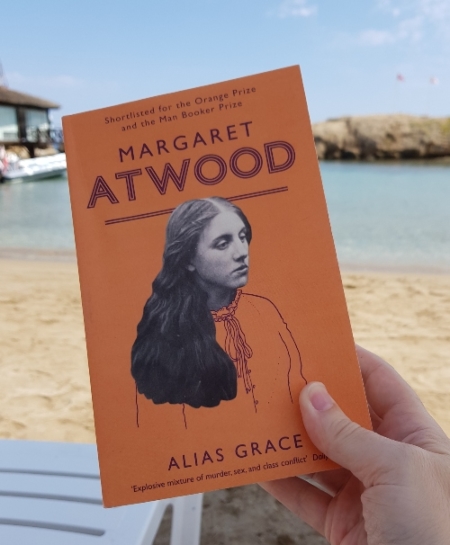 I write to you from Lapta in Northern Cyprus, which is approximately nine miles west of the city of Kyrenia. I will be holidaying here until the 6th October, so you may not see me around quite so much as usual (my posts will probably be on the short side, too). I will, however, remain in touch and update you should anything of literary significance occur during my slothful days on the beach.

As usual, this is a weekly post in which I summarize books read, reviewed and currently on my TBR shelf. In addition to a variety of literary titbits, I look ahead to forthcoming features, see what’s on the night-stand and keep readers abreast of various book-related happenings.

I read and reviewed The Cake Tree in Ruins, a dark but inventive short story collection by Akiyuki Nosaka, set on 15th August 1945 – the day Japan surrendered, and the Second World War formerly ended. >> Read my review >>

I’m going to share with you four of my favourite literary posts from around the blogosphere. There are so many talented writers posting high-quality book features and reviews, it was difficult to limit the list to only these few – all of them published over the last week or two:

On The Handmaid’s Tale & Continuing Adaptations Beyond the Source Material – Jenna likes “the ambiguity” of Offred’s fate in Atwood’s dystopian masterpiece. She feels it “makes a point”. The continuing TV adaptions have taken us beyond the original storyline. Discover at Jenna Bookish why she now loves the ending of the novel “more than ever”.

‘Nights at the Alexandra’ by William Trevor – Kim Forrester of Reading Matters says this 1987 novella about an emigrant couple who move to Ireland during the Second World War is a “memorable, haunting read, one that lingers in the mind long after the final page has been finished.”

Homo Deus: A Brief History of Tomorrow by Yuval Noah Harari – “Harari is excellent at synthesising vast concepts with pertinent examples”, writes Clare at A Little Blog of Books.

Umpteen fascinating articles appeared on my bookdar last week. I generally make a point of tweeting my favourite finds, but in case you missed anything, here are a handful of interesting snippets:

The Paris Review: Writers’ Cribs – A tiny desk, magazine clippings, paintings and a piece of hip-bone are just some of the memorabilia with which writers have filled their pads.

The Guardian: Should we stop reading into authors’ lives and get back to their books? – “There are so many good writers whose politics and opinions leave us queasy about enjoying their work” writes Nell Stevens. “But is a story also a celebration of its author?”

The Times Literary Supplement: Life without literature is death – An “enlightened argument for reading” by John Ridpath.

London Review of Books: What makes a waif? – Joanne O’Leary on Maeve Brennan, the Irish short story writer and journalist.

Medium: Rescued from oblivion after six decades: the long-lost memoir of Ironfoot Jack, King of the Bohemians – Geoff Ward writes of Jack Rudolph Neave, a well-known Soho figure in pre- and post-war London.